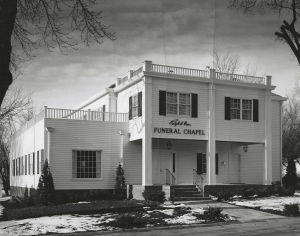 Harvey Gray Lutz was born in Boonville on December 12, 1933 a son of Ella M. Griffin Lutz.  He was a graduate of Fayette High School.  Harvey served his nation in the US Army during the Korean War. Harvey was a self-employed finish carpenter for many years and took great pride in his work.  One of his special projects included work at Shepherd of the Hills Lutheran Church in Fayette.

Harvey was also a former owner and funeral director of Ralph A. Carr Funeral Chapel in Fayette for several years retiring in 1990.  As a funeral director, he was known for his attention to detail for the families he cared for.

His favorite hobbies and activities included woodworking, caring for his home and vehicles and traveling, especially trips to Las Vegas with his wife, Karen.  In Harvey’s later years a softer side developed when he took in a stray kitten feeding it with an eyedropper until it could eat on its own. The cat was named Trouble and is a much loved member of their home.

He was preceded in death by his mother; a son, Jimmy Lutz and siblings Jimmy and Hazel.

Funeral services honoring Harvey’s life will be held at Carr-Yager Funeral Home in Fayette at 3:00 PM, Sunday, October 3, 2021 with Rev. Mike Jackman officiating.  Visitation will be one hour prior to the service at the funeral home.

Following the service, interment with military honors will take place at Walnut Ridge Cemetery in Fayette.

Family and friends are invited to a time of fellowship and refreshments following the interment at the Shepherd of the Hills Lutheran Church.

Memorial contributions are suggested to the Wounded Warrior’s Project or the First Christian Church in Fayette.

Condolences may be shared at www.carryager.com.

To send flowers to the family or plant a tree in memory of Harvey Gray Lutz, please visit our floral store.